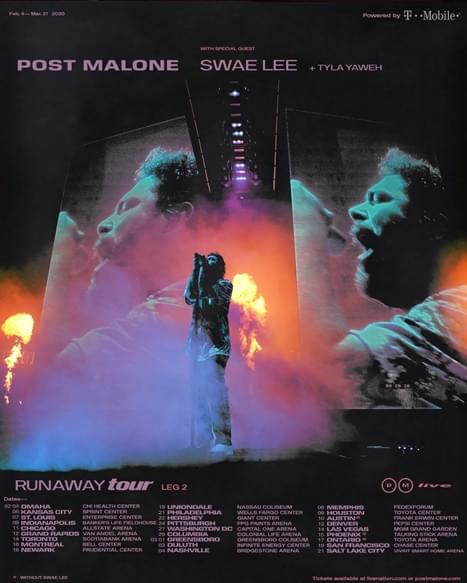 Produced by Live Nation, he returns to the road on February 4 in Omaha, NE at CHI Health Center and visits major cities across the United States and Canada. The tour closes out on March 21 at Vivint Smart Home Arena in his new home of Salt Lake City, UT. Once again, Swae Lee and Tyla Yaweh support as special guests.

The full routing can be found below. Tickets go on sale to the general public beginning Friday, November 22nd at 9am local time at LiveNation.com. Citi is the official presale credit card of the tour. As such, Citi cardmembers will have access to purchase presale tickets beginning Tuesday, November 19th at 5pm local time until Thursday, November 21st at 10pm local time through Citi EntertainmentSM. For complete presale details visit www.citientertainment.com. T-Mobile customers can get exclusive access to stage-front pit tickets at every U.S. concert, as close as any fan can get to the stage – even at sold-out stops! Un-carrier customers can snag their Reserved Tickets starting 30 days prior to each show at first day prices – just another way T-Mobile thanks its customers simply for being customers. For tickets and more information, visit https://t-mobile.com/music.

Post Malone doesn’t stop making history. His latest album, Hollywood’s Bleeding [Republic Records], recently returned to #1 on the Billboard Top 200 for the fifth non-consecutive week, marking the longest run atop the chart this year. It stands out as the biggest album event of 2019 and will continue his reign into 2020.

About Post Malone:
A diamond-certified GRAMMY® Award-nominated phenomenon, Dallas, TX artist Post Malone regularly rewrites history, blurs boundaries, and incites internet-breaking conversation with every move. Emerging in 2015 with a genre-less brew that inspired a movement, he delivered the diamond-selling “Congratulations” [feat. Quavo], achieved back-to-back #1 debuts on the Billboard Top 200, received countless multiplatinum certifications around the world, and smashed one record after another with his Hot 100-topping hits. His 2019 third full-length, Hollywood’s Bleeding [Republic Records], represented an audience and critical high watermark. Not only did it arrive at platinum status and earn high praise from the likes of Pitchfork, but it also reigned at #1 on the Billboard Top 200 for four weeks and returned to the chart for a fifth week, making for the longest run atop the chart of 2019 and the first release to do so in over a year. It followed the immense success of the triple-platinum beerbongs & Bentleys, which also landed at #1 a year prior. In the wake of beerbongs & Bentleys, Post crushed a record in place for 54 years. He charted nine songs in the Top 20 of the Hot 100, notching “the most songs in the Top 20 of the Hot 100 ever.” Moreover, he also trounced the record for most simultaneous Top 40 Hot 100 hits with 14.

As of 2019, his catalog comprises the GRAMMY®  Award-nominated “rockstar” [feat. 21 Savage” (8x-platinum), “Sunflower (Spider-Man: Into The Spider-Verse)” [feat. Swae Lee] (8x-platinum), “I Fall Apart” (5x-platinum), “Psycho” [feat. Ty Dolla $ign] (5x-platinum), “White Iverson” (5x-platinum), “Better Now” (4x-platinum), and more. Not to mention, he sold out numerous arena tours and launched his own mega-popular Posty Fest in its second successful year in 2019. It all started with his triple-platinum influential 2016 debut, Stoney. With records under his belt that will likely never be surpassed and a generation of artists and audiences worldwide under his spell, Post Malone simply doesn’t stop.

Swae Lee has made a name for himself outside of Southern hip-hop duo Rae Sremmurd, and is a force to be reckoned with both within and beyond the hip hop world. Tracks such as French Montana’s “Unforgettable” show off his singing chops and his impressive list of writing credits includes the hook to Beyoncé’s “Formation.” For Rae Sremmurd’s  upcoming project, Swae and Jxmmi will present a 3 part album consisting of a duo side of the album and parts with each of the brothers exclusively and allowing for more Swae melodies to take shape. The first Swae track released off the album, “Hurt to Look”, continues the energetic production that Swae is known for, but shows off a tender, moodier side to Swae’s singing. The much more serious, emotional ballad has that characteristic Swae hook, but implements a more groovy and comparably chilled backdrop. It’s a song to “make you feel some kind of way,” as Swae describes it while explaining that each track is a whole feeling, often mellow and “easy on the ears.” Above all, however, Swae insists that the music is meant to be “feel good” and both embodies and advocates for a positive life outlook. Swae’s goals for his music as universal and far-reaching—with projected listeners ranging from doctors to lawyers to kids and “whatever lifestyle you live,” as Swae puts it—but entirely unique to what is popular and being produced today are not far off. The album proposes to position Swae as a heavy weight, unpredictable musician producing serious music that still has the enjoyable, turn up element that Rae Sremmurd is known for. And that is exactly what Swae’s music fulfills: a serendipitous unpredictability that is only predictable in the sense that Swae, with all his Gemini-crooning selves, always delivers.

A new kind of Rockstar, Tyla Yaweh defies everything, even genre. He seamlessly merges R&B, hip-hop, and pop without apology. As a result, he has quietly become a phenomenon. Beyond racking up over 100 million-plus cumulative streams globally  and landing on the cover of coveted Spotify playlists like Signed XOXO, the Orlando-born and Los Angeles-based 24 year old disruptor has performed alongside everyone from Post Malone to Jaden Smith and Saint JHN and collaborated with the likes of French  Montana, Ski Mask The Slump God, Juice WRLD, and more. Not to mention, he received acclaim from Complex, Hypebeast, Billboard, Pigeons and Planes, Wonderland, HotNewHipHop, and more. He continues to make a name for himself on the road, having recently given rousing performances at the likes of Governor’s Ball, Firefly, Bonnaroo and more, with Lollapalooza, Reading and Leeds, Life is Beautiful and more set for later  this summer. Breaking rules and boundaries all at once, he’s primed to explode in 2019 with the aptly titled project, Heart Full Of Rage.