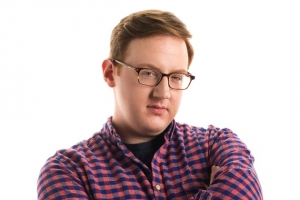 Tickets are on sale now to catch Comedian Matt Bellassai at Bradley University Rennaissance Coliseum Monday, September 30th at 8pm! Listen to win yours this week with Jordan weekdays from 2 til 7 and next week with ORyan & The Morning Grind.

Matt was raised in the suburbs of Chicago and peed his pants until he was eight years old. Unsurprisingly, he went on to become Alan B. Shepard High School’s Biggest Nerd of 2008, and wore such titles as Mathletes’ Most Valuable Player, President of the Science Club, and First Place Champion in the 2006 South Suburban Science Invitational’s Insect Identifying Contest. Which is not a joke. He has a ribbon for identifying insects in an actual insect-identifying competition. What a fucking nerd, right?

Matt went to Northwestern University where he ran for student body president and fucking lost. He graduated in 2012 with a degree in journalism and approximately one full assload of student debt.

In 2012, Matt joined BuzzFeed as a comedy writer and was Employee of the Month for 39 straight months. In 2015, he co-created, wrote and produced the web series “Whine About It,” a weekly video series where he got drunk alone and violated numerous Human Resources bylaws.

After three and half years with BuzzFeed, Matt left to pursue solo projects in early 2016. He has since launched a new weekly web series, “To Be Honest,” and a stand-up comedy tour. He is currently working on a forthcoming scripted web series, book, television series and podcast. He is also working on his tan.